I find it increasingly more difficult to come here. The presence I want to embody here isn't about spelling out every detail of my life. Every motion. Every new adventure and move. The thing that is most aching to be seen, is something deeper than that. Its a little girl, who's shy. Who needs to escape from time to time. With "the facebook" as I like to call it, you can get the little glimpses into my travels and comings and goings. New art. So what is this space to me? Its something more sacred I believe. When I say it here, it better be pretty much the most ME than I can make it. This space is about the slowing down. The being still. Forget about making sense. I don't like writing that way. To give my readers everything handed to them. That's like going to watch a blockbuster summer movie. I'm more about the obscure documentary. It might even leave you hanging. I'm not sure this space (or me) is to that point yet, but that's my goal.

I'm the one who likes to talk about Stanley Kubrick. How I watched a documentary on the conspiracy theory that he in fact faked the moon landings. With his expertise in filming 2001: a space odyssey, I would hire him. Did I believe it for a day or so? Yes. Totally convinced. But I also think that Mr. Kubrick is such a genius that maybe, just maybe he wanted you to think he was hired to film and fake the moon landings. (btw, thanks Kym Stromberg for sending me the video) I would put a link to what I watched but its since been deleted. There is this though, that is coming out shortly at Sundance.
But not everyone is interested in hearing about sci-fy crap. Except when I met Lucie at art and soul portland. She and her husband and I, over a couple glasses of wine, talked Kubrick with much enthusiasm.

I am an introvert. You may not know that. I do like being around other folks. I'm a high-functioning introvert.  Sometimes a moment in solitude fills me right up. So if I seem, Not on....I'm not.

I have a thick, southern accent. When I was in Portlandia......um, I mean Portland, I visited with some doggie friends passing by and their parents said "you are a transplant". Yes, I've been mistaken for Aussie and Irish. I know you are jealous.

So I'll leave you here with a poem I wrote at the be present retreat:

Eight
this girl she.....
favors dolls and the frenzy of an arcade on a friday night.
playful quarters.
chaos swirling

she decides that playing hide and seek outside is an escape
crouching and running, she all of a sudden forgets the slamming door.
tires squealing.
screaming voices mean nothing anymore
because the air in her lungs is moving to quickly to pause and ponder

the snow comes and holds there for 2 weeks
not melting before Christmas morning, I pray
i watch my little sister laugh and i somehow want to protect her
8
1982
cold 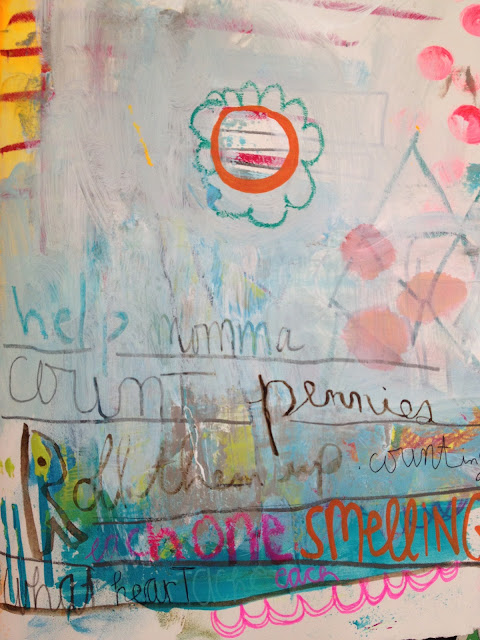